The shapes Linden Lab provides for all of their human starter avatars, from those currently available today all the way back to Ruth and the first SL starter avatars have absolutely, atrociously bad proportions.

Tiny heads, stubby "T-rex" arms and stork-like legs are the norm in SL! The average avatar is so absurdly bad that many SL users have developed a distorted view of human body shape that makes Cosmopolitan's body ideals look positively reasonable!

So, starting today I am launching my own line of SL shapes. 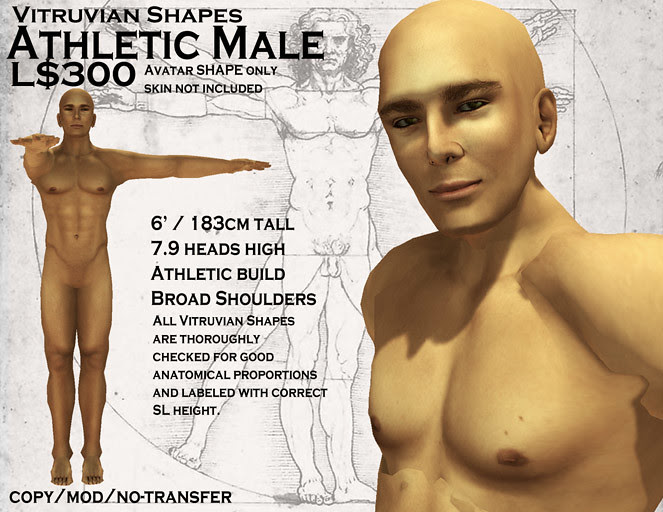 The name is derived from Leonardo DaVinci's "Vitruvian Man", a sketchbook study of human body proportions as described by the Roman architect, writer and engineer Vitruvius, and DaVinci's own observations of the human body.

While it's true that no two bodies are quite identical, it has long been observed that certain general rules apply to the human form, with relatively little deviation. Such as the fact that the average human adult is about 7.5 heads tall, has a wingspan more or less equal to their height and their legs make up about 1/2 their overall height. 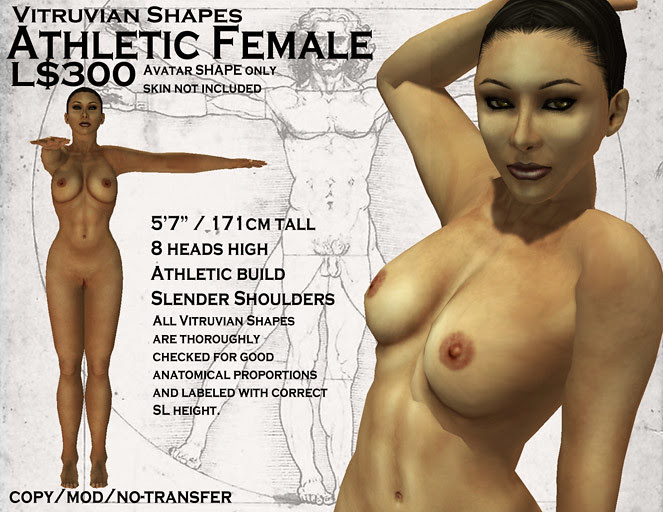 Of course, there is some deviation, a human adult can be anywhere from 7-8 heads tall, their leg length and wingspan may be longer or shorter than average by up to around 3 inches. Not to mention the variety of body types out there. Thin, fat, muscular, et cetera. So there is plenty of options for variety.

I also wanted to provide better body shape options for people looking to scale their avatar down to more realistic sizes. Because there's no simple way to scale down an SL avatar while keeping proportions intact and the SL appearance editor provides no guides or tools to help with proportions trying to scale down an avatar shape can be an extremely frustrating and time consuming project. It's much easier to simply customize a shape that is already close to your desired size.

I already have the first two shapes up for sale. Athletic Male and Athletic Female can be found in the SL Marketplace or any of my in-world shops and the Doomed Ship shop area. I about six more female shapes almost ready to go but I'd like to work on more male shapes so I can release them in pairs.

The next set I have planned is "Heroic" and "Amazon". I'm also planning some photo shoots to illustrate how better relative scale between avatars can make avatar interaction animations work better.
Posted by Penny Patton at 7:27 PM