That is the male mesh wearing a shoe clothing layer for the additional height that provides.

However, I was recently taking a closer look at that in an attempt to create an as proportionate as possible giant avatar. Using more accurate prim measurements, rather than the scripted rulers I usually use for cursory looks, I found the maximum height of the SL avatar is actually 8'8"/263cm.

Without the shoe layer height, the male avatar mesh maxes out at 8'3"/251cm.

As for how successful I was in creating a proportionate giant?

The male avatar is far better for this than the female, as, without the shoe layer height, he can at least have his arms proportionately long when maxed out. Unfortunately this means you cannot make the arms longer than would be proportionate for an adult human of normal stature, most giants are depicted as either being gangly or having emphasized upper bodies, both of which require longer than average arms to achieve.

The avatar also had a short torso, even maxed out at 100 the torso was nearly half a foot too short for his body. This wouldn't have been so bad if the arms could be equally long respective to the legs to achieve that lanky, gangly look, like the giants of Skyrim.

Another odd thing, but maxing out the head size does allow for the giant to be almost exactly 8 heads tall, so there's really no excuse for all the pin-headed avatars.

Still, it's not something I'd feel comfortable slapping the "Vitruvian Shapes" moniker on and it really highlights the limitations of the appearance editor that while you can make a shape over eight and a half feet tall, you can't give it the proportions of a figure that tall.
Posted by Penny Patton at 12:09 PM 3 comments:

Inspired by the screenshot I took for the dwarf shape inclusions in the Vitruvian Shapes set, I decided to take the idea a bit further to see if I could better illustrate one of the points I'm often trying to make about scale. 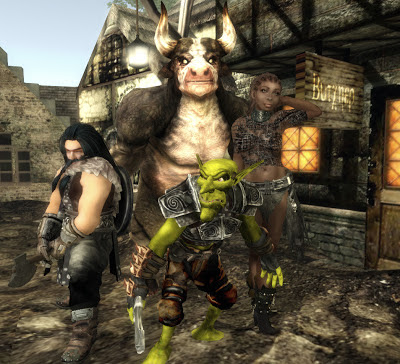 The largest avatar here is the minotaur. He's hunched over and pushed to the background of this group shot,  but he towers over the others at 8'8"/263cm when standing up straight. Mythological minotaurs are usually depicted as being anywhere from 6' to 9' tall. This is similar to the range in Tauren heights in World of Warcraft.

What's remarkable about that is that the SL avatar mesh maxes out at the same exact height, and a lot of male avatars in SL do exactly that! So the hulking giant in this screenshot is only the size of the tallest "normal" human avatars in SL. With the average human male avatar in SL being anywhere from 7'1"/216cm to about 8'/244cm, the minotaur isn't very imposing at all when tossed out into the grid at large.

To take that comparison further, the human woman on the right is only 5'7"/170cm (although her high heeled boots push her up to 5'11"/182cm which is taller than the average North American man, unless he is also wearing 4" heels) and would be considered a dwarf compared to the 6'4"/193cm female starter avatars LL provides to new users.

This means that, just using the base avatar mesh and no tricks, we could create an almost 9' tall giant which would stand eye to eye with the minotaur pictured here. Giants in mythology are generally depicted between 7' and 11' tall. The giants in Skyrim are also "only" 11-12' tall.

Enabling people to create intentional giants is not a new argument from me, so then what exactly is the point I'm trying to drive home, here?

Well, the most often cited counter argument I hear is that the flip side of making human avatars human sizes is that we'd eliminate the ability for people to create intentionally shorter avatars, like, for example, dwarves and goblins.

To that I say that the dwarf and goblin avatars in the first screenshot of this post clock in at 5'/152cm and 4'9"/145cm, respectively. The female dwarf shape I also include in my free shape set is also 4'9" and neither is the shortest I could have made them.

It is difficult to maintain adult human proportions under 4'11"/150cm, certainly, but when you aim for dwarf and child proportions it becomes much easier. In reality this is true as well, as a 5' tall adult has notably different proportions than a 6' or 7' tall adult.
Posted by Penny Patton at 6:01 PM 1 comment:

I've updated the full perm package set of Vitruvian Shapes to include brand new fantasy dwarf shapes in the Tolkein or RPG mold.

The dwarves are 4'9" for the female shape and 5' even for the male shape.

SL has a lot of giants, but not very many dwarves to be seen.

Also included are shapes I made to improve the SL starter avatars. One for the Commando, and another for the Gladiator. There are only male versions of these at present but I will be adding more shapes over time.

You can get the whole set over on the SL Marketplace HERE.
Posted by Penny Patton at 9:00 AM No comments: