Beautiful Second Life
Why Linden Lab needs to present a more impressive
image of Second Life and how they can achieve that.
Part 2


Ok, so we've shown how LL can encourage better looking avatars in SL, what else could be improved to make SL more visually appealing and nurture better looking content from the userbase?

That means the tutorial/orientation sims, the welcome areas/infohubs and any other "Public Works" projects.

How do I mean? Well, most people taking a look at SL are probably familiar with virtual worlds already. Videogames have been creating immersive, interactive virtual worlds to explore for several decades now, and when people look at Second Life's visual's they're going to be comparing it to the likes of these:


These are the expectations set by about ten years of videogames. In contrast, this is the face Linden Lab puts forward for Second Life:

The Wilderness, a new area designed to test the new pathfinding features LL is adding soon is a huge step up from the average Linden developed content, but it's still not blowing the socks off of anyone. 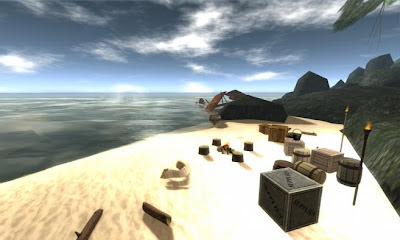 But let's look at how good Second Life can look.

Would you believe that none of these three SL screenshots were taken with higher end features like shadows enabled? Also, all three predate the addition of mesh. My point being that it does not take a powerful computer to make SL look good if a sim is well made and employs good windlight presets.


So what is the deal? If SL is capable of looking as good or better than many popular, professionally produced videogames, why do the Linden sims and marketing screenshots all look so bad?

Well, a large part of it is just that LL does not hire professional artists to create their in-house content. They hire resident creators called "Moles", who are often amateur hobbyists who just happen to like building in SL. LL then provides them no real direction or support, as there is no in-house art team.

As a result, the environments created for Linden Lab suffer from a lot of recurring problems. Like a lack of proper scale, poor lighting, inefficient use of resources and no real sense of design.

Because of these issues Linden owned sims are often low on detail and content, spread out over much to large an area (making it a chore to wander between points of interest while exploring) and generally don't lead visitors through them like a proper environment (real or virtual) should.

Worse yet, the SL userbase as a whole is less likely to be exposed to quality builds which showcase Second Life's true potential. Such environmental pieces provided to the userbase via the Library, which new users often make use of to see how things are made, provide poor examples and instill bad building habits.

The obvious solution here is to hire better artists to build better environments, but it's not entirely that simple.

You have to realize that there are flaws with both the default SL visual settings, and the content creation tools themselves which make it extra difficult to create good looking environments in SL.

First, there is the whole issue of scale. I've written an entire article on that problem alone, so I won't repeat it all here. To summarize, almost all content in Second Life is built to double scale or larger.This spreads content out over a larger area (making sims more tedious to explore, those interesting buildings in the distance are twice as far away if the sim is built double scale) and puts a greater strain on resources while making it more difficult to create detailed, content heavy environments. In addition to making it more difficult to create better looking builds, this problem of scale also limits us creatively, by giving us a smaller land area to work with, respective to the size of our creations.

And why is everything in SL, from avatars to buildings, so oversized?

1. LL starts new users off with 7' tall avatars and provides incorrect height in the appearance editor.

This is solved easily enough by reducing the size of the starter avatars and correcting the bug displaying incorrect height in the appearance editor. Doing these things and given enough time, the trend will eventually be towards smaller avatars.

2. The SL camera placement is set unreasonably high above the avatar. forcing ceilings to be higher, forcing people to build larger in general.

This can be fixed simply by changing some numbers in the default camera placement presets. Instructions for doing so are HERE.

Correcting these two issues and building Linden owned sims to more sensible scale would not only help Linden Lab create more impressive and engaging locations to draw new users into SL, but would free the userbase to take better advantage of scale in their own builds.

To be clear, tho, building to scale does not always mean building small. Linden owned builds should, primarily, be accessible by avatars of all sizes. However, that means building larger structures while maintaining correct scale. Windows smaller avatars can see out of, tables, countertops and chairs scaled to realistically sized human avatars with doors and ceiling heights accessible for dragons and werewolves.

As many of Linden Lab's builds are large, open affairs, this shouldn't be a problem. The idea isn't to restrict access to avatars of larger sizes, but to demonstrate scale.

Second, there is the issue of efficient use of resources. Linden builds often have a much higher land impact than they should need for the amount of detail present. Linden builds should demonstrate effective use of the tools available, including sculpts and mesh. This would allow them to showcase more detailed environments, while providing examples of how to create more detail in SL to the residents who examine these builds while learning how to create their own content.

Currently there are no tools in the viewer allowing the creation of either sculpts or mesh, despite the fact that user created in-world tools have shown how easy it would be to create a client-side sculpt creation tool that users familiar with prim building would find easy to use. Linden Lab should investigate the possibilities here.

In addition to good use of sculpts and mesh, Linden builds should demonstrate effective use of SL's native prim building system, demonstrating how more detail can be pulled from using cut, hollow and other prim features.

Providing full perm versions of well-made structures used in Linden owned builds via the Library could be a very good learning tool for new residents. Providing poorly made content this way hurts the ability of beginning builders to learn good building techniques.

Finally, there is the issue of poor windlight defaults. "Windlight" is Second Life's sky and atmospheric shader system. Proper windlight settings can make all the difference between an environment in Second Life looking awful or gorgeous, yet LL insists on using exceptionally poor settings for the defaults.

Here is a scene using the default sky settings: 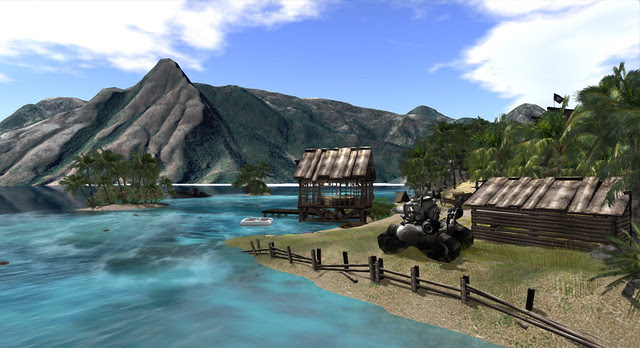 And that very same scene with custom windlight settings; 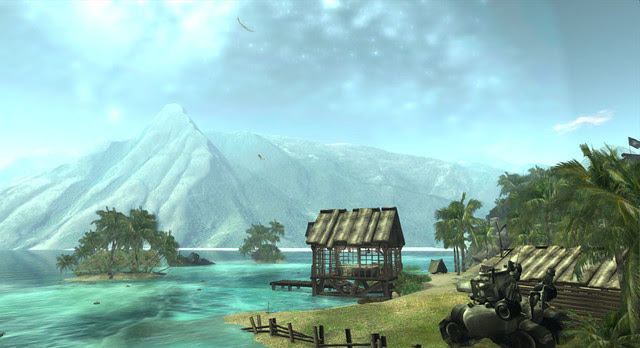 Better windlight defaults would come at no performance cost to users, yet they have such a profound impact on visual the visual quality of Second Life. Few users see anything other than the defaults, except possibly when they enter a sim with it's own estate windlight settings. Others find the default settings so bad they stick to a single daytime preset and so never see the world as those around them do. 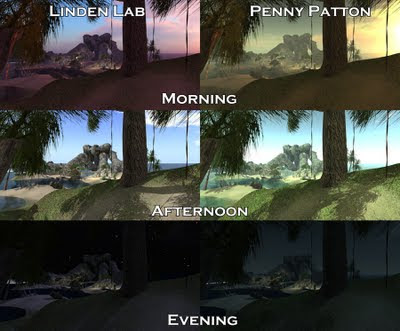 Beyond the problems, there's a few things Linden Lab really needs to keep in mind with their future building projects.

Lighting is often overlooked or poorly done in Linden owned builds. When creating public environments, Linden Lab should look for people capable of making good use of lighting, including high end features like projected lights. A good environment designer can balance the two so that whether or not a visitor has shadows enabled, the lighting should be suitable.

Linden builds are often guilty of using default settings on light sources when they use lights at all. A plain, white light with the only change being to increase the radius. These lights look horribly unnatural and tend to wash out nearby textures.

This screenshot demonstrates a Linden infohub where the visible lights (the lanterns) do not cast any light in-world, but the potted tree does!  The effect, of course, is off-putting. Darkness around all of the visible light sources, light being cast around the trees where no visible source is to be seen. Worse yet, every single potted tree in the infohub was a light source and there were 12 such trees on this terrace alone. This means constantly flickering lights for everyone without shadows enabled.

Lighting is so important to environment design that movie and game studios both tend to hire professionals that focus entirely on that.

Sound is another issue Linden Lab needs to be conscious of. Although it doesn't show up in screenshots, use of sound is vital in environment design, yet most Linden builds are entirely silent. Even in their "Wilderness" sim, an SL showcase currently being promoted to SL users with Premium accounts, very little use of sound. There's even a huge, multi-story waterfall that is entirely silent.

Like windlight, the camera FOV settings can be used to make SL look better without impacting user performance and framerates. I've found upping my FOV by a few levels (pressing ctrl+0 about 5 times) adds a much more cinematic sense of depth to SL's visuals, a trick used by a lot of modern videogames. 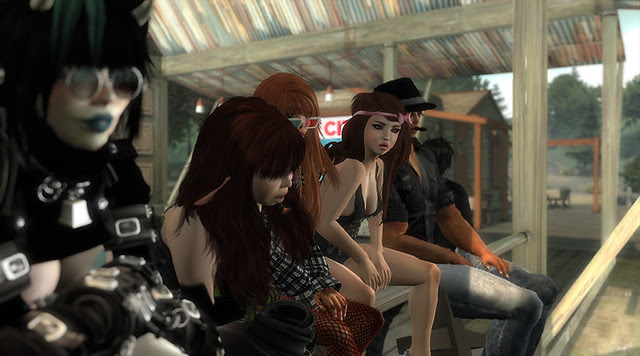 In closing, Second Life can be gorgeous, but few people, whether they're active Second Life users or people who've yet to try the virtual world, will ever know this unless Linden Lab makes a point of showing them.

Well made starter avatars, well made public environments like the Welcome Areas and Infohubs, and visually impressive windlight defaults can all be employed to showcase the potential in SL's graphics capabilities.
Posted by Penny Patton at 9:20 PM