Beautiful Second Life
Why Linden Lab needs to present a more impressive
image of Second Life and how they can achieve that.
Part 1

There are three major complaints we often hear from those who have tried Second Life and given up on it. Three problems that are cited again and again as reasons why so many potential new users have left, never to return.

"There's nothing to do."

Volumes could be written about all three of these problems, but right now I'm just going to focus on the first. "It's ugly."


Oh, sure, there is content within Second Life that can, under the right circumstances, be gorgeous. Believe me, I'm well aware of how good SL can look. It's just that arguing this in the face of how ugly SL is to the average new or ex-user misses the point entirely.

Most SL users, even those that stick around for years, will never see anything in SL that is anywhere close to how good SL is capable of looking. This isn't because their computer isn't up to rendering all the pretty effects, either.

You also need to get it out of your head that it takes a monster of a computer to make SL look good. That is simply not the case. While you won't get all of the shiny features that really make SL gorgeous, you can still make SL look great on 10 year old computers, or a machine you would put together today for under $500.

No, this is all about design and Second Life's default settings and starter content. That's where the biggest problems are.

How do I mean? Well, let's start with a new user's very first impression of SL. The starter avatars. 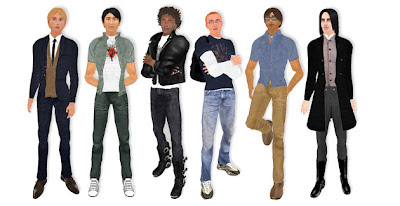 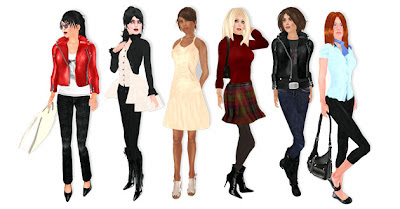 Currently, new users are offered a pretty wide selection of avatars to choose from when they start. I'd go so far as to say too many. Still, the human starters all share a lot of the same common flaws, and as most people signing up are likely to choose a human avatar they're a good place to start.
Long time SL users will often comment about how the starter avatars in recent years are a huge improvement over the early starter avatars foisted on SL from the beginning up until about 2010 or so. However, "better than what they used to have" isn't exactly a stellar recommendation, and new users aren't likely to have their impressions of the current starters influenced by how bad the starter avatars were in 2005.
If you're the average person, you'll probably look at these and find none of them particularly interesting. You might comment on SL's poor graphics and chalk up the less than appealing selection to that. If you've had any art training, on the other hand, you're probably shaking your head and wondering how avatars with such poor proportions could have possibly gotten past Linden Lab's art director and been selected to provide new users with their very first impression of Second Life.
All of these avatars have tiny heads, absurdly long legs, and the women in particular have freakishly short arms. Why the women? Because the appearance editor was set up by someone completely unfamiliar with human anatomy. The arm length slider for women (but not for men) is skewed in such a way that you need to set your arm length around 80-100 (maxed out) to have just proportionately long arms, and if your avatar is much taller than 6'/183cm then it actually becomes impossible to have proportionate arms.
The shortest female starter avatar from the selection pictured is about 6'8"/203cm. All of the human starter avatars are similarly oversized, which creates other problems we'll get to later.
That's not the half of it. Once you actually log in, these avatars look even worse!
Since all avatars start with the same default animations, that girl in the red coat carrying the giant purse? That giant purse is constantly clipping through her legs and torso Not just a little, she shoves it right through her body, impaling herself completely like some sort of surrealist social commentary.
Also, invisiprims, a graphical glitch that used to be the only way of masking the avatar mesh to allow for things like shoes were disabled by LL over half a year ago now for anyone enabling shadows, meaning no matter which starter avatar you choose, if you want shadows on in SL you are now treated to this sight!
That's right, Linden Lab is so concerned about making a good impression, most of the human starter avatars still rely on a glitch LL disabled over half a year ago now. Worse yet, since invisiprims still work for anyone who doesn't have shadows enabled, you will still see many avatars walking around broken, on your screen at least, because of this.

So how can Linden Lab make avatars look good?


In an ideal world, Linden Lab would go so far as to create a brand new, better made avatar mesh and an all-new appearance editor to go with it, but for the purpose of this article we are only looking at how Linden Lab could easily improve the visual experience of SL with a minimal investment in time and resources.


First, LL needs to recognize that they need to address both the starter avatars and the avatar creation tools.


Well, aside from the bad starter avatars LL foists on new users, there's also the issue of the appearance editor. Quite frankly, it's broken. I go over how in detail in "A Matter of Proportion" but I'll recap briefly here and see if we can point out more solutions to the problems.

1. When creating a new shape you are offered only two options, male or female, to start from. Both of these shapes have abysmal proportions (head too small, arms too short, legs too long, etcetera).

LL could vastly improve on this by providing multiple base shapes for people to choose from. The very first option you should have when creating a brand new shape is "what body type do you want?" Do you want a muscular super hero? A tall, thin super model? Do you want to create an overweight shape? Maybe you'd rather a more average body shape to start with? Each of these options should be properly scaled and proportioned to start with, letting you customize from there, rather than starting you with a 7' tall mutant with short arms and stork-like legs.

2. The height shown in the appearance editor is wrong. That's right, if you're using the official Second Life viewer, the height displayed in the appearance editor is off by about six inches, telling you that you're shorter than you actually are. If it says 6' even, you're actually about 6'6" or 6'7" or so. This encourages larger avatars, which creates more problems than you might initially realize. The most immediate being that the arm length slider for women maxes out with short arms  if you go over about 6' tall.

LL could fix this by simply making the appearance editor show your correct height. Several popular TPVs accomplished this years ago, before LL opted to display avatar height in the appearance editor at all. That's right, LL added the feature broken, and worse they knew it was broken when they added it.

3. The proportion sliders are skewed in awkward ways. All of the sliders go from 0 to 100. You might assume that moving all of the sliders to 50 will give you an average sized human of average proportions. You'd be wrong. Instead, you'd get an overweight half troll, half Vulcan suffering from thalidomide poisoning.

Worse yet, you run into issues like the fact that female avatars often find they cannot make their arms long enough to be proportional! You need to practically max out arm length to get proper arm proportions. Even that only works if your avatar is 6' or shorter, which is bad because LL starts women out at 6'4" and the tendency is towards larger avatars due to an irrational stigma against shorter avatars, which some claim are "childlike". Yes, you read that right, avatars shorter than 6'4" are considered childlike. Even if they're obvious non-humans like dwarves, goblins and aliens.

4. There are no guides to help you create a shape with correct human proportions. In addition to it being difficult, or in some cases impossible, to create a well proportioned shape from the horrible starting shapes, there are no tools or guides to make it any easier. The only way to even check your proportions is by rezzing prims while sitting on a pose stand. 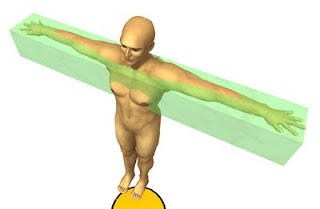 LL could make it a lot easier to create better looking avatars if they added a set of visible proportion guides, like a silhouette, behind the avatar while editing your shape. Another very helpful tool would be a "proportion lock", which automatically kept your avatar in proportion. An optional lock that could be toggled on or off so no freedom to create deliberately non-human or stylized shapes would be lost.

5. There is no slider to scale an entire avatar larger or smaller while keeping their shape in proportion. That's right. If you adjust the "height" slider, you arms, legs and other body parts do not resize with your overall height. You'll quickly find your proportions entirely messed up if you alter height more than a few inches. This is made extra confusing by the fact that "Height" is not the only slider that affects avatar size. There are 8 sliders in all that affect your avatar's height.

Re-sizing a shape could be greatly simplified if there were a single "scale" slider that adjusted your whole shape, proportionately, as you re-sized yourself.

That about covers the avatar situation. To recap:
1. Provide a small selection of great looking, properly scaled and proportioned avatars that impress new users and give them a strong base to start from when they go to customize their appearance.

2. Provide a range of pre-made, properly scaled and proportioned body types for people to choose from when creating a new shape. (Bury the old shapes in the depths of the Library.)

3. Fix the problems with the appearance editor that make it more difficult to create good shapes.   Fix the way proportion sliders are skewed between male and female shapes.
Fix the torso muscle bug that breaks increasing torso muscles beyond 50 on the female shape.
Show correct height.
Provide proportion guides and a "proportion lock" that can be toggled on/off.
Provide a single slider that scales an entire avatar larger or smaller while keeping their body in proportion.

If Linden Lab can manage all of that, then "ugly avatars" will no longer be an obstacle to drawing in new users, or retaining those they attract already.


To be continued in part 2 where we will look at how LL can create better environments for public sims while also nurturing better looking community created environments.
Posted by Penny Patton at 10:05 PM