The Island of Milk & Cream

A word of note to those wishing to explore the build featured in this article, the Island of Milk&Cream has plenty of quiet, relaxing areas, much of the island being very scenic in nature, but it also has a significant amount of adult content. You're very likely to encounter that if you go exploring in the sim.

In addition, aside from the text added to the Milk&Cream SL search image, none of the screenshots in this article are edited. I did not even use "photographic" windlight presets just for these images. This is how SL looks using my custom windlight day cycle. I find it amazing LL refuses to update their own default shader settings to look this nice, but that's a subject for another article.


The Island of Milk & Cream
One of the things I do in Second Life is design environments. Basically level design and modeling for a great big social sandbox. It can be a bigger challenge than videogame levels since you're not designing around goals, and there's so much more you need to take into account due to the sheer amount of freedom SL allows in avatar sizes, camera placement and even interface. Not to mention the lack of base tools and settings to allow for more universal concepts such as scale, which videogames take as a given.

As a multi-player environment you also need to see where people gather, where they avoid going and what they fail to discover entirely (which can be good or bad).

At some point I'll probably write an article going into these differences and the challenges unique to SL in environment design, but for now I really just wanted to share some of the work I've done this week.

The Island of Milk & Cream is a project I did for a few friends. Alyce Beaumont-Snow, Kichi Kutanaga and Lilyth Lykin. I had my own tiny 4096 sq.m. parcel where I had a little tropical farm to house my shop of cowgirl avatars and accessories, they ran a similarly themed club that was much larger and had much more traffic and invited me onboard. A short while later a move to another sim prompted a redesign of the club and they gave me complete control over the project.

To a quarter of a sim (16,384 sq.m. and 3,750 prims). Kichi was really keen on returning the club itself to a "treehouse in the sky" theme, so we decided on a floating island with giant trees to support the treehouse. 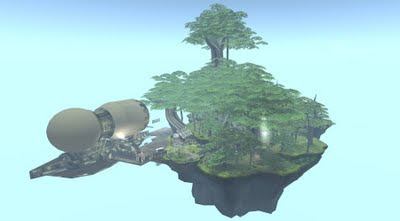 A quarter of a sim is a huge amount of space. Most people reduce that to an area that seems only as large as my old 4096 sq.m. parcel. I had Kichi set out enough trees and island pieces that I was able to construct a single large floating island with a bit of landscaping to the surface. Particularly, I wanted to have a river flowing through it which ended in two waterfalls on either side of the island.

With the layout in place I started in on detail. The farm portion of the island was easy, just laying out all the pieces of my old tropical farm build, minus the palm trees. I also cut out the stables from the old farm, since with plenty of island space I didn't want the farm itself to be the only interesting spot to go, so I spread the content out around the island.

I love to explore, so I also love to craft environments full of nooks and crannies for others to explore. I'm particularly proud of the secrets for people to uncover at the Island of Milk & Cream.

There's currently three major secret areas to the island, each one is just as detailed as the island environment itself, showcasing just how much content even a quarter of a sim can hold as well as all of the importance of all of the design issues I've brought up in previous articles about Second Life.

Observant explorers should notice the rickety looking ladders, catwalks and scaffolding leading down along the underside of the island. Those that do will be rewarded with the discovering of the largest of the island's three secret areas. An underground bunker built into caves inside the island itself.

The island's other two secret areas are much more tricky to find. It helps to think of Second Life like a videogame, poking at those items which, in a videogame environment, most would explore as a matter of course, but such secrets are so few and far between in SL that few SL users develop the habit.


Still, the secret areas of the island are rewards for those who do, and fun little building projects for myself. I'm considering releasing some of them as skyboxes or building sets on the marketplace.

There's plenty yet to do with the Island itself. I have big plans for finally working on the treehouse area and the airship docks that serve as the arrival area and shopping district for the island once mesh arrives, particularly the addition of 64m prims. For the time being, the current dock area was created by Alyce Beaumont-Snow and the current treehouse area is mostly Kichi Kutanaga's work with a bit of additional detail added by me.

In the meantime, the island is coming along nicely and there's already plenty to see and do, even if cowgirls aren't your thing. If you have an SL account, you can visit the island by following the SLURL here.
Posted by Penny Patton at 9:17 PM