Reducing the Cost of Land by Scaling Down

The topic of land pricing in Second Life is a popular one on the forums and in everyday SL chat. Most people agree that land simply costs too much.

First off, hey, we'd all like land in SL to be cheaper! That would be great! Hell, I'd love for it to be free! That'd be awesome! But, in order to keep the lights on, LL has to cover their expenses and, according to statements from LL, land cost is where they get most of their money. Not the marketplace. Not premium accounts. Land ownership.

Now, there are arguments to be made for lowering the price of land to get more people buying land. I've made those arguments myself, but that's not what I want to talk about right now. Right now I want to point out that if you own land in SL, chances are you're wasting most of it without even realizing it! That's right, you own more land than you realize!

Here's the thing, from prims to mesh to avatars, everything in SL can be made larger or smaller...except land. If you want more land you have to buy more land. You can't go into "Edit Land", grab the little white box in the corner and stretch it all larger like a prim or mesh object. There's no "Land Size" slider you can adjust to make your land larger or smaller like an avatar shape. If you're paying for 512sq.m. of land that is all you get. If you make all of the content on that land larger, you are making your land smaller in relation.

Don't believe me? Here's an exercise, rez a cube and make it 10x10m. That's the size of a 33x33 foot room. Don't make any walls yet we're just doing an exercise here. 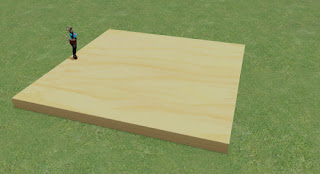 Ok, so there's are 10x10m(33x33') room. For reference, my avatar in this scene is 6'1" in those shoes. So slightly taller than average for an adult man in the real world. Now let's decorate, but we're first going to decorate with furniture at the typical sizes furniture in SL comes at out of the box. 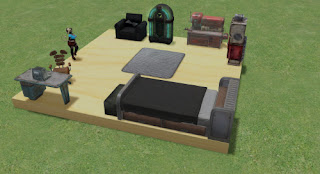 Looks comfy, right? Keep in mind most men in SL are 7-9' tall, so significantly larger than my avatar in this picture. That's why I seem so small despite being 6'1". You can find women of all sizes in SL, tall and short, but it's extremely rare to see a guy shorter than 7' in SL, so most furniture in SL is made to accommodate men 7-9' tall. So let's see what happens when we resize the furniture to be 1=1 scale. That is, how large these items should be if we're assuming realistic human sizes for avatars. 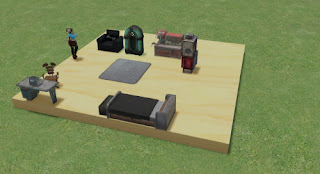 Wow, my avatar doesn't look tiny anymore, and look at all this extra space! It's as if we suddenly have more land to work with! Almost twice as much space it looks like! I'd recommend avoiding no-mod furniture since you obviously won't be able to scale it down like this if you can't modify it.

Now, with smaller items like furniture, you don't typically save much Land Impact by scaling it down, you're mostly saving space. A couple points here and there, but it's not usually a huge savings. But with buildings, on the other hand, if we reduce the typical SL house down to 1=1 scale we're often going to see huge Land Impact saves. I usually manage to cut the LI of a house or other structure down to half when I reduce it closer to 1=1 scale. Buildings also tend to be scaled up much more than furniture. Again, furniture is scaled up to accommodate 7-9' tall avatars, but buildings have to accommodate SL's awful default camera placement so people tend to make buildings, vehicles, etcetera more like double scale. If you make a room much smaller than 10x10m you're going to have a lot of issues with the camera, but we can fix this!

Click here for an article about the camera settings I've been using since at least 2007. They solve every camera issue you're going to run into when trying to build smaller. Better still, LL will be adding these settings to the official viewer in an upcoming viewer update, along with tools to change and save your very own personal camera placement settings! So look forward to that!

And I'm not even saying we should all be building to 1=1 scale, so please don't misunderstand. Even with my improved camera settings I would not recommend making rooms much smaller than about 10x10 (but be honest, 10x10 is already tiny compared to most rooms in SL buildings) and I'd even suggest making ceilings a little taller than you'd find in real life. The key part of that is "a little", not a lot.

By doing all this you should be able to free up about twice as much space and anywhere from 1/3 up to about half your Land Impact.

And this is just one trick to getting more value from the land you're paying for. Just one trick that allows you to build more using less land. There's other tricks to, such as using rezzer systems that allow you to save environments as rezzable packages that are only rezzed on your land when you're using them, and using skyboxes connected via teleporter doorways to build vertically instead of horizontally to take advantage of the 4000m of space above your land.

I think LL should do more to showcase these tricks to people so that they can see the true value of the land they're paying for and maybe not feel quite so much like SL land is overpriced.